Brexit: Tempest in a Teapot?

There are several concerns that warrant addressing with respect to Brexit.  The first is the psychological impact on consumers and investors created by the uncertainty of the situation.  While many of these concerns will likely prove to be exaggerated, it is possible they might gather enough momentum to become self-fulfilling.  The second concern is the actual impact of the UK withdrawal from the EU. 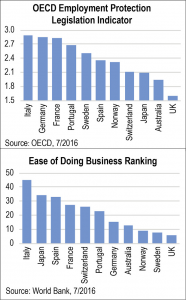 Although the transition may be more painful, once it is completed it will mean trade is more expensive, and the flow of goods, money, and people will be hindered.  This is certainly not positive, but it is not a crushing blow to the UK or any of its trading partners.  Ultimately, despite the inconveniences outlined above, the UK will still be the most business-friendly country in Europe, as the adjacent Employment Protection Legislation Indicator and the Ease of Doing Business Ranking charts show.  Finally, there is the risk that other nations might opt to pull out of the EU as well. However, we believe this is unlikely.

There are a number of important reasons why we believe other nations will not withdraw from the EU. A key reason is that no net receiver country (i.e., countries that receive more payments from the EU than they contribute) is likely to leave.  This accounts for more than half of the member states.  Among the net contributor countries, by far the largest are Germany and France, which together account for almost 40 percent of the EU budget.  If Italy were added to this group, it would make up just under half of the EU budget.  Although Italy is a net contributing country, it can easily be argued 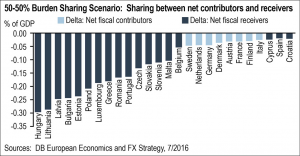 that they are actually a net beneficiary due to the substantially lower interest rates their membership affords them.  The UK accounts for 12 percent of the EU budget, so an important question is which countries will bear the additional burden, once the UK is no longer contributing.  One of the more likely scenarios is an equal sharing of that burden among the contributing nations as a group and the receiver nations as a group, as illustrated in the adjacent 50-50% Burden Sharing Scenario chart.

As indicated, France and Germany bear a large share of the financial burden for the European Union.  From this perspective, they appear to be likely candidates for potential withdrawal, but both countries have deep-seated political reasons to maintain the EU.  The precursor to the European Union (a coal and steel union) was established in the early 1950s with the idea that strong economic ties between France and Germany could prevent further conflict in Europe, as these two nations were key powers in both World Wars.  The political symbolism for both countries is almost certain to prevent either from withdrawing, despite the economic cost.

A final note on Brexit:  Although unlikely, it is possible that the lengthy process for exit (as the withdrawal negotiations progress) will afford voters an opportunity to better understand the costs of exit and could result in a reversal of sentiment.  Under this scenario, it is possible that the UK would remain in the EU.  The level of uncertainty surrounding these events will persist for some time as the process unfolds.